Outdoors: Are the waters of Lake St. Clair clean enough? 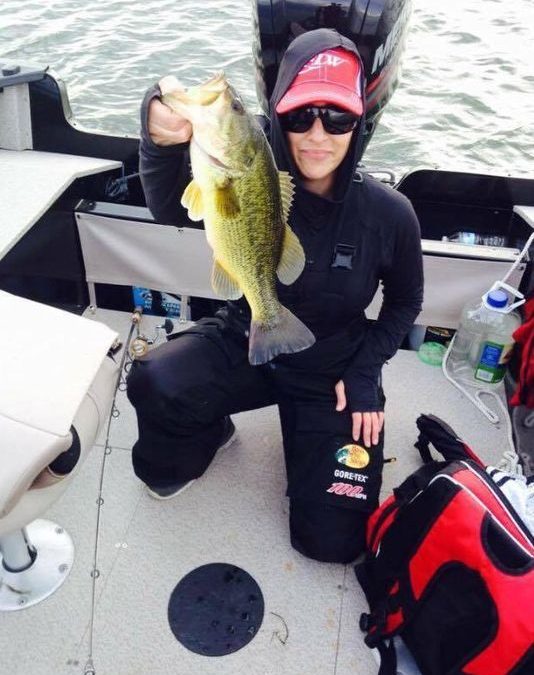 But Department of Natural Resources biologist Mike Thomas says not too many anglers are taking that opportunity.

Michelle Jalaba of Birmingham is taking advantage of it. She is entering her first Fishing League Worldwide tour as a professional angler and gets out every day. But she is concerned: It seems like many would-be anglers along the shores of Lake St. Clair are unable to benefit from the rule change — or even fish at all.

Mike Gutow is among them. He grew up envisioning a home where he could fish from shore.

“My whole life revolved around Lake St. Clair and going fishing,” he said. “You get in your car, you drive to the marina, go to the lake, drive back in, and that’s it. Obviously, that’s paradise.”

Gutow even married the perfect woman for this dream. His wife, Michelle, had written in her yearbook, “In ten years I will be married and living on Lake St. Clair.”

Finally, in 2011, the couple took a risk and bought a house that required renovation right on the lake.

“We took a look at the lake and the seawall and imagined all the good times we would have fishing and jumping off the seawall with our kids,” Gutow said.

Everything was fine until they had a storm.

“It wasn’t until I moved here and there was a major rainstorm that I realized there was a problem,” Gutow said. “Three days after the storm, a massive blob floated down to Lake St. Clair. It smelled like a Port-a-John in a city fair on a hot day.”

The goo clung to his sea wall and at least a dozen others. There was speculation it was a repeat of an incident in 1994, when tons of excess vegetation growth exacerbated by fertilizer filled the neighborhoods with rotting plant matter.

It would turn out to be something worse, Gutow said, but it took a while to figure this out.

First, Gutow noticed the beach was closed and wondered if there was a correlation.

“I asked around, and neighbors said it didn’t used to be this way,” he said. “Then I saw a page on the Macomb County website that had sewage discharge information. All the information was right in front of me.”

It took him a lot of time to correlate the discharge information to beach samplings and closures, but he ended up with 20 years of data that said the beaches were closed a majority of the time after a discharge.

This led to another realization.

“The beaches only get tested two to three times a week,” he said. “The test results don’t come back for two or three days. My mind started racing. I realized the beaches should have been closed three days prior. So people are swimming in sewage, relying on testing to tell them when it’s safe. Everyone is swimming in this filth.

“I was reassured that it was only plant matter, but when I pulled toilet paper off my sea wall, I got the feeling it might be human waste in there, too.”

“They found human markers,” Forlini said. “There were some animal markers, but that wasn’t the majority of the problem. It was human waste contamination.”

He, too, realized beach closures were based on data from two days prior. Forlini got the state to appropriate funding for a testing system that would put up the results in a couple of hours. And though they’re testing the lake daily for waste, Forlini said they still shut down the beaches based only on the results of the old testing method.

“They want to make sure the two tests perfectly correlate,” Forlini said. “They do 90% of the time.”

Gutow said: “This isn’t just about sewage and poop. The concern is that humans are also releasing antibiotics, radiation, hormones, and it’s chemicals going into the lakes unfiltered, affecting the ecosystem of our lake. These things are mixing together. More importantly, the fish have no choice but to swim in the waters that have these chemicals in it.

Thomas said most of Lake St. Clair is unaffected by these dumps.

“The situation here is that we’re really blessed,” he said. “The fish that are here are not exposed to those types of chemicals or bacteria or coliform bacteria for any length of time, because the water flow is so great. Beach closures are a different animal, though.”

Lake St. Clair is flushed every seven to nine days.

Gutow hopes that is true, but he isn’t betting his life or his children’s fishing future on it.

“My hope is that politicians will begin running on platforms that protect our aquatic resources and find ways to stop polluting them,” he said. “Lake St. Clair is one of the greatest lakes in the world. We have giant muskies and perch and bass and shoot carp. We need to keep it that way and restore it, too.

“The more people that follow us on Facebook or Twitter, the more politicians will work toward solving these problems. There’s not one answer, but there can be a happy ending.

“I just want kids to be able to fish off the seawall.”

Go to SaveLakeStClair.com for more information about efforts to stop the pollution.